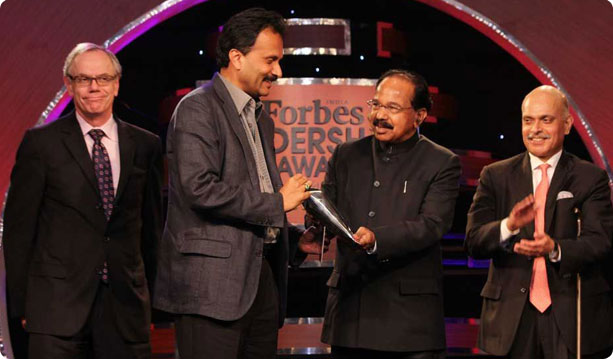 V.G. SIDDHARTHA OF COFFEE DAY HOLDINGS WAS AWARDED AS THE NEXTGEN ENTREPRENEUR AWARD BY FORBES INDIA

October 21, 2011 : On Friday, October 21, 2011 the who’s who of the corporate world, thought leaders and the glitterati gathered at the Trident Hotel, Mumbai, to raise a toast to those who’ve defined success on the business scene this year. The occasion was the first Forbes India Leadership Awards (FILA). FILA distinguishes itself from the clutter of business awards by choosing to recognise those that symbolise transformational leadership.

The night began with the guests being ushered to their tables and proceedings kick-started by the hosts for the evening, Suresh Venkat and Forbes India associate editor Cuckoo Paul. This was followed by a keynote address by Indrajit Gupta, Editor, Forbes India. Raghav Bahl, founder and editor of Network 18, later spoke about taking contrarian calls in situations of adversity. The special guest for the evening was Timothy Forbes, chairman of Forbes Digital. He gave insight on the purpose and role of business success. He further explained how business success equates to happiness and its role towards society and that the word ‘success’ may be spelt as ‘service to others’. The chief guest for the evening, Union Minister of Corporate Affairs, Veerappa Moily promised a roomful of people from corporate India his ministry’s continued support. The winners in each of the 10 categories were chosen by an esteemed jury comprising of Baba Kalyani, Akhil Gupta, Janmejaya Sinha, Rama Bijapurkar and chaired by K.V. Kamath.

V.G. Siddhartha of Coffee Day Holdings was awarded as the NextGen Entrepreneur award for transforming a commodity business into one of India’s largest retail brands. And for broadening his business beyond retail to logistics, hospitality and financial markets, said he wanted the company to be one of the best Indian brands within the next 10 years.

To create your profile

There is an exclusive offer on
Cafe latte Claim it now!